Some games are meant to be played daily. Some games you play until you get burnt out. Other games, well, they’re meant to be picked up when everything else feels meh. For me, Loco Dojo is one of the last type. Even though it’s marketed highlighting the social/multiplayer aspect, I’m happy to dive into it every now and then for some solo fun. The game is the debut release from Brighton, UK’s Make Real studio.

Loco Dojo is a board game of mini-games come to life. It offers a total of 16 challenges, four each within four zones: sea, desert, woody hills, and what appears to be a swamp. There are two modes, tournament and solo challenge. The tournament mode can handle two to four players across the two most popular VR platforms.

At launch, you have the option to join or start a multiplayer tournament or play the solo challenge. Each player takes their turn for 10 board spins, or what the game’s sensei refers to as “trials.” A monkey marker sits on any random mini-game within the tabletop. The player spins the dice wheel, numbered one to four plus a “strategy” notch. Once the wheel stops, the marker somersaults its way to the corresponding trial.

Loco Dojo’s mini-games are ridiculously fun, with just the right level of difficulty to keep you on your toes. Some are kind of familiar, such as flinging cookies as discs, “cat-apulting,” or throwing gigantic toothpicks like javelins. A few of the trials, though, are really quirky: milking pigs using its piglets, moving massive chicken eggs while boxing, and driving a pig over narrow, winding bridges! 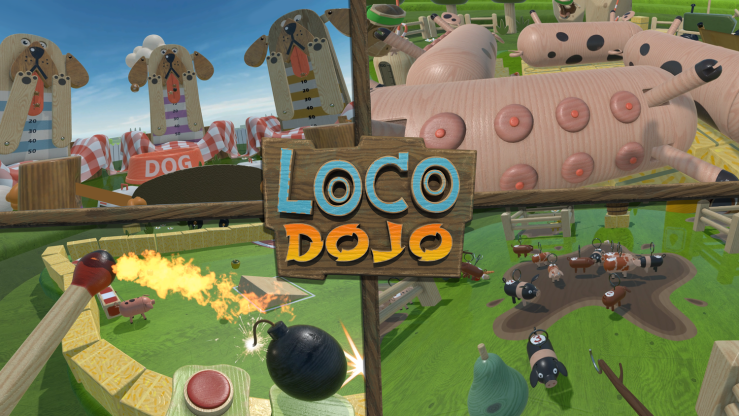 All trials are timed, and at the end of each one, you’re scored on a scale that goes from dark cloud, to bronze, silver, and gold. Each prize has an equivalent number of golden suns awarded by the sensei. As you collect more golden suns, you also move up the ranks of different colored headbands. The ultimate goal is to get to black headband level (like a black belt! Get it?!).

As you go through each of the 16 trials, you’ll find some favorites. Those are, of course, the ones you usually score best at. I personally dread landing on a certain few of these mini-games because I just never do well with them. The good news is, during your turn at the dice wheel, there’s a chance at landing on the strategy notch. This gives you the advantage of picking your next trial. There are also mystery trials on the board. If your marker makes it way to one, sensei picks the game for you. When playing this game against others you’ll want to have a strategy of trying to get mini-games that you are best at, allowing you to get the most golden suns, leaving you the victor.

In spite of all the “silly,” Loco Dojo packs a lot of punch in terms of graphics and overall design/quality. All the assets are well-realized with a wooden toy style.  It couldn’t be any more appropriate for this type of game.

While most of the gameplay features more basic, familiar activities–archery, target shooting, and hand-eye coordination–the concept and execution in every mini-game are some of the most impressive I’ve experienced in VR to this day. Don’t get me wrong, it’s not revolutionary in terms of breaking new grounds and is certainly not a fully-fleshed-out AAA campaign game. I just love that in one trial my Vive controllers are giant crab arms, and on the next one I’m wielding nunchucks. The general quality of the title is simply exceptional coupled with the wacky games, and having to quickly jump from one zany game to the next keeps you immersed and well entertained.

Test your silly skills, challenge your friends, and train at the Loco Dojo! Available on Steam at $19.99.