Prepare to spend hours defending your planet from cat-astrophe! Kittypocalypse is a tower-defense game originally developed exclusively for VR. Yes, the name sounds goofy, but it’s a hell of a real-time strategy game. As soon as you hear your in game AI assistant speak, you know it’s serious business.

When I first saw the trailer for Kittypocalypse in August, I was immediately impressed by the level of detail in the visuals. And while I thought it looked interesting, I wasn’t so sure I liked the idea of annihilating cute kitties. Needless to say, it went to my “try later” list. Now, I kind of regret that decision. The game offers a campaign mode with 15 well-crafted levels, plus a very challenging skirmish mode.

Every level is set on a floating island, and each island features beautiful, unique landscape. The primary objective of each level is to protect the control points from hordes of alien cats. As the story goes, these control points are vital to the existence of your planet. A few turrets surround each control point where you can place weapons strategically. The ring around a control point houses a number of slots that the cats will attempt to capture. Every time a kitty makes it to a slot, you’ll hear the AI assistant say “Control point is contested,” which, for me, is usually met with some swearing. If all the slots are filled for any control point, you fail the level. If you do complete your mission, you’ll be treated to some VR fireworks at the end of the level! 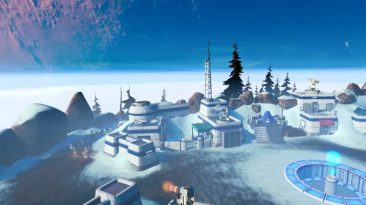 You start off with a small budget, with which you can buy ammunition. Your budget grows as you destroy enemies, which are (up to) 22 waves of evil, extraterrestrial kitties. Along with your budget increasing, more weapons and more upgrades are unlocked. Weapons include the Gatling gun, laser, Tesla coil, missile launcher, and “blobcelerator,” among others. As you may have guessed, each weapon varies in damage level, have different ranges and targets different types of kitties. Kitties are worth more if they’re quicker, or wear different types of armor. Armored kitties will show two health bars: one for the cat and the other for the armor.

My personal favorites among the weapons are the missile launcher and the Tesla coil. The former travels distances to destroy even the toughest armor and the latter electri-cutes them kitties. I also couldn’t wait to unlock the annihilator, which shoots extra-lethal beams that decimate cats almost instantly. It’s a strangely satisfying sight, even for someone who adores kitties.

Controls are fairly easy to master in Kittypocalypse. You get a blue navigation controller for moving and zooming, and an orange one for interaction (intended for your dominant hand). I did notice that the interaction controller oftentimes defaults to the left, when using the Vive. So, I usually have to swap the two at the start of the game. This has been reported to the devs at Bolvërk Games, who suggest the physical swap in the meantime.

The menu is a floating one — you simply point with the orange controller, and press trigger to select an item. The same controller is used for building and upgrading weapons, releasing kitty waves, and displaying information about the different cats. To build, aim at a turret and the list of available weapons will appear. Then, aim at the one you want and press trigger. Once done, the AI will say, “construction completed.” During each level, you can also press the orange controller’s menu button to pause, retry the level, or quit.

Kittypocalypse is a well-loved VR title for good reason. Just as you start to get complacent, the game comes up with surprising challenges. Plus, it doesn’t hurt that the visual design is fantastic. The replay value is high, and not once did I feel the content become repetitive. In fact, I plan on doing a speedrun after I’ve finished all the levels.

Every now and then, I experience an odd audio glitch and the occasional dropped frame, a bug the devs are aware of and are still trying to fix.

Get your paws on Kittypocalypse, available on Steam for $19.99.