It’s been a long time coming for city building games in VR. A few have tried so far, but for me, only one has succeeded. I always imagined how it would be a perfect fit for room-scale gaming and Skytropolis has definitely delivered. It’s here and I’m addicted.

Skytropolis is the second game originally developed for VR by Vancouver-based indie studio, Mythical City Games. The game’s concept is straightforward: build a sustainable vertical city. The game offers three levels of size and difficulty, plus an added sandbox mode. I’ve clocked in almost 15 hours of gameplay since its release, so far, and have successfully finished all three career mode levels.

The game starts on a high-level floor inside a skyscraper where the different unlocked levels are displayed on a lazy susan tabletop. All your saved games are also accessible here. If you select a saved game, you’ll see it materializing floor-by-floor outside your window, fast-forwarding through your entire build process which is always fun to see. Then, you’ll be transported into the game. Pretty neat!

From the Ground Up

Building blocks in Skytropolis are called modules, which are grouped as different demands: residential, commercial, hotel, public spaces and services. There are also transportation and wall modules that function for logistical or aesthetic purposes. Aside from meeting demands, the main performance targets are population, sustainability (scaled from 0-4 stars), happiness and income.

Modules are “unlockable” throughout gameplay, and vary in size and sustainability ratings. Residential units come as different types of small apartments, townhouses and large apartment buildings. Commercial modules are offices, retail, food and entertainment establishments. There are only four types of hotels in the game, and they take the most time and effort in unlocking. Public spaces come in the form of parks, a school, museum, and even a theater. Services, such as energy sources, water treatment, food sources, medical and security centers, and recycling facilities play the greatest role in improving sustainability. 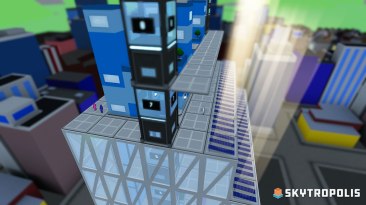 As with most building and simulation games, balanced zoning matters in Skytropolis. To meet population demands, you must build enough residential modules, as well as commercial buildings to provide residents with work. Happiness is positively affected by the quantity and quality of public spaces within residential floors, and negatively affected by certain services. Sustainability improves with balanced resources, not just by building more sustainable forms of energy sources, but also by prioritizing more sustainable types of modules in general.

Logistically, all modules must be horizontally connected to a transportation block, specifically walkways. Vertically, all floors must be connected by a skylift.

I should also mention that Skytropolis can be played on desktop. Although, based on the few gameplay videos I’ve seen, maneuvering it in VR seems a lot more fun. I say that only because I’ve been a long-time fan of the bigger, more advanced franchises better played on a horizontal, landscape spread.

A few players have commented about the tutorial affecting their first impressions of the game. While I agree that it’s a tad lacking, it didn’t necessarily turn me off from actually getting into it. Or maybe I’m just a sucker for building games? I think a more robust tutorial would absolutely improve replay value, though, as it would help clarify the roles of all the modules, etc.

Now, let’s get into the controls. There’s a lot of trackpad use with the HTC Vive, something I don’t personally favor. But, hey, it’s unavoidable and is actually practical for this type of game. To access the different modules, click the topmost (or north) section of the left hand trackpad. Module orientation and other module-specific options are available through the trackpad (on both hands), as well. Selecting and placing modules are done using trigger. Press the grip buttons simultaneously on both hands to adjust scale, and press them alternately to move around. As a bonus, first-person scaling is available, so you can actually experience your Skytropolis like the citizens!

The Ups and Downs

Skytropolis is truly a successful execution of what a VR city-builder should be. It’s not the most complex or expansive (yet), but it’s a step in the right direction. I appreciate the level of detail currently available in the game and I’m excited to see where the devs are taking it. I’m even thoroughly enjoying the sandbox mode, and see myself building some more, experimenting with different styles.

The game, of course, is not without its flaws. Sometimes, module placement can get buggy. For example, a module would stay at a certain orientation (i.e. stuck with the facade facing backwards) and would not budge even after the game is relaunched. This has happened with different types of structures, including windows. Another  occasional bug is with reclaiming modules. Sometimes when selecting a module up top, another module below it also gets highlighted. It takes a couple of tries before it goes away.

Thankfully, the devs seem very receptive to feedback and have already squished a few bugs since launch.

In the future, it would be awesome to add back economy and other metrics into the sandbox mode (which currently doesn’t track any city stats). I’d like to be able to measure how ridiculous the balance could be between creative design and functionality. Of course, a wider selection plus finer aesthetic refinement of modules would be a dream. But knowing building games, I’m positive the Steam Workshop will soon be buzzing with plenty of user-created content.

Become a VR architect and build your own vertical city! Skytropolis is available on Steam at $24.99.