“Less is more” is a maxim that’s slightly overused, but has almost always rung true. When it comes to creative pursuits such as the fine arts, minimalism is definitely one of the most difficult techniques to pull off. It’s also the reason I appreciate the puzzle game Awaken by Blueprint Reality so much.

Awaken’s virtual world is that of elegant low-poly art, subdued gradients, mesmerizing lights and soothing sounds. The overall objective of the game is to “become an architect of light, awaken the universe and bring back the stars.”

Although the theme is quite familiar — more or less in the same vein as Light Repair Team #4 and Carpe Lucem — Awaken sets itself apart in that instead of “maneuvering” light, you place elements strategically around a space, so that balls of light could travel from a source to a portal. Some of these elements can be further stretched or bent. It is also in these aspects of object physics that the game really shines (pun very much intended). These elements come in the form of rails, trampoline pads, fans, funnels, and the like. In each level, you’re given a fixed number of each of these tools, gradually introducing the physics of each one as you progress. 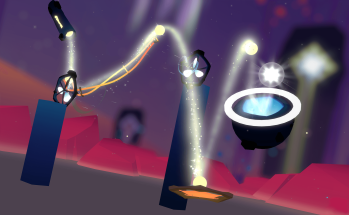 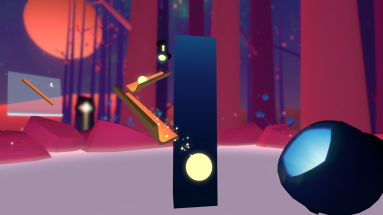 Awaken starts at a “sanctuary,” which is a partly broken-up ice lake. You’ll find two altars, toward either you can teleport — one to play game levels, the other for creating levels. The game level altar is literally a tree, where available levels are represented by polygon fruits. To grab one, or anything in game for that matter, simply aim at it and press trigger. To start a level, place the polygon inside the blank slot. You’ll then be transported accordingly. There are currently 30 base levels to go through, and another 10 have been added in a recent update as the Blueprint Challenge pack.

The game uses the simple trackpad aim-and-release teleportation. Because Awaken is optimized for room-scale gameplay, this mechanic is really handy, especially if you’re playing within a smaller space. I have to say, I love how immersive of an experience the game offers.

The Bells and Whistles

Awaken is currently available as an early access title and has definitely laid a solid-enough foundation to make me look forward to future content. I was thrilled to complete the 30 base levels to gain access to the 10 newly-released ones and was not disappointed. There is a definite step-up in terms of difficulty with the new levels, which I was very pleased to see. It shows they are listening to the community who has voiced the need for more challenging content.

Also in the last update, Blueprint Reality added the capability to record 5-second gif shots which can be enabled in the desktop menu. Pretty neat! It makes showing off your level creations or skill an easy task.

All in all, I’ve really enjoyed Awaken and have been taking my time with my play-through, letting myself indulge in the beautiful atmosphere. It’s a bit of a steep price for an early access title, but it’s definitely a polished game with a clear, defined art style and immersive, thoughtful gameplay. We’ve already seen one content update and I am certainly looking forward to see what they’ve got planned for full release.

Become an architect of light! Awaken is available on Steam at $29.99.