Most VR users have what’s called a “daily dip,” or a couple of them. The term means exactly as it sounds: something you like to dip in, on the daily. It could be a game that you play to warm up before getting into something more active or intense. Others like something to help them wind down right before exiting VR. Lately, my daily dip has become close to literal with Crazy Fishing by Offpeak Games and Mana Wing, an arcade-style fishing game.

Crazy Fishing is an Early Access title set in an explore-able environment currently offering one world with five locations. Upon entering the game, you’ll be transported to a jetty by a lake, holding a fishing rod on your left hand. On your left is a pail of bait, and on the right, you’ll find a tablet that serves as your guide. The tablet has three sections: hook, fish and shop. You can upgrade to cool hooks through the hook section, or upgrade your rod through the shop. The fish-o-dex will show detailed information about the available types of fish, and it also records your progress. 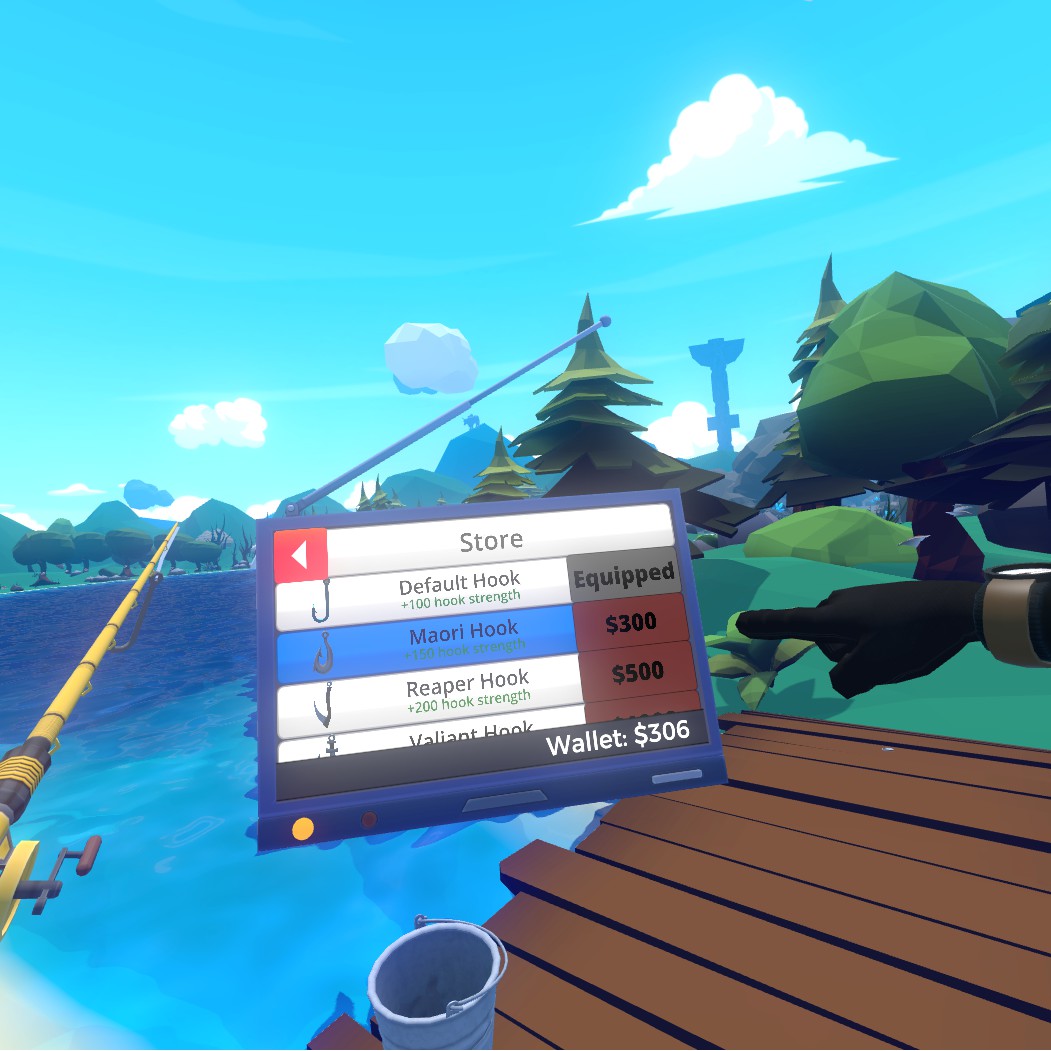 Behind you is a huge contraption with two grinders: one that turns your catch into bait, and the other to trade it for money. Beside it is the teleporter which shows all five unlock-able locations with their corresponding buttons. Note: You can still freely teleport through the environment at any time. These act as a quick way to jump to your favorite fishing spot. Actually, when Crazy Fishing first launched, you could only fish from these pre-set spots, but then in an update added the ability to freely teleport anywhere you’d like to explore, or find new spots to fish from.

Teach me how to fish

The game defaults with your left hand holding the rod, but you can easily switch hands by gripping a marker on the handle. From the jetty, you can actually see all the other spots once they’re unlocked: boat, camp, cave and bridge. And once those locations are available, you can quickly jump from one to another and the areas between them, using the menu button on your free hand.

A quick tutorial window appears telling you to grab bait, hook said bait, pull down the trigger, aim the rod where you want the hook to fall, and let the trigger go mid-cast when ready. If you try to land the hook at a nice, deep spot, you might just get a “good cast” compliment. And then, just like any good fisherman would, wait for that precious nibble.

The controls in Crazy Fishing are pretty much where they need to be: simple and effective. It’s surely not super realistic, but that’s why it’s “Crazy Fishing!”

Placing the bait on the hook can be done two ways: grab one with your free hand and place it on the hook, or simply drop the hook where the bait is and it will automatically catch on. Then give it a good cast where you see the fish. When the fish nibble at the bait, you’ll feel the haptics work as a warning. An actual bite will be cued by a munching sound matched with vibrations, plus a visual gauge which tells you to reel in the fish. Wind the reel as fast as you can to keep the arrow within the green area. If the dial moves towards the left, move the reel faster. If it moves the other way, it means the fish needs a little bit more slack, so either pull the trigger, or stop winding the reel. Otherwise, the fish could get away! (The nibble and updated reel mechanics were also added in post launch via update, so it’s clear the devs are hard at work and listening to the community.)

A blurb about the fish you just caught will appear when you catch one. It will show its name and whether it’s legendary, rare or common. Then it’s up to you to decide whether you want to make more bait or trade your fish for cash.  Unlock-ables, including other locations can be bought with cash, and buying different baits, hooks, and rods attract the rare and legendary fishes. The shop feature definitely still needs work; the menu can get quite wonky at times. It will be nice to see a solid working menu with an easy to use interface for buying/upgrading rods/hooks or available bait.

If you want to use bait other than the free ones available, you can teleport around and pick up stuff. Grab shells, shrimp, cookies, and much more. In fact, everything that you can pick up in-game, you can use as bait, or put in your virtual mouth and eat! Some of these edibles will have some pretty fun effects.

The devs recently added a vending machine where you can use your money to buy premium bait like lasagna and cake slices, chicken wings, sushi, and other unique items. Another cool addition is a belt around your virtual waist, giving you a place to store any of the fun items you find. 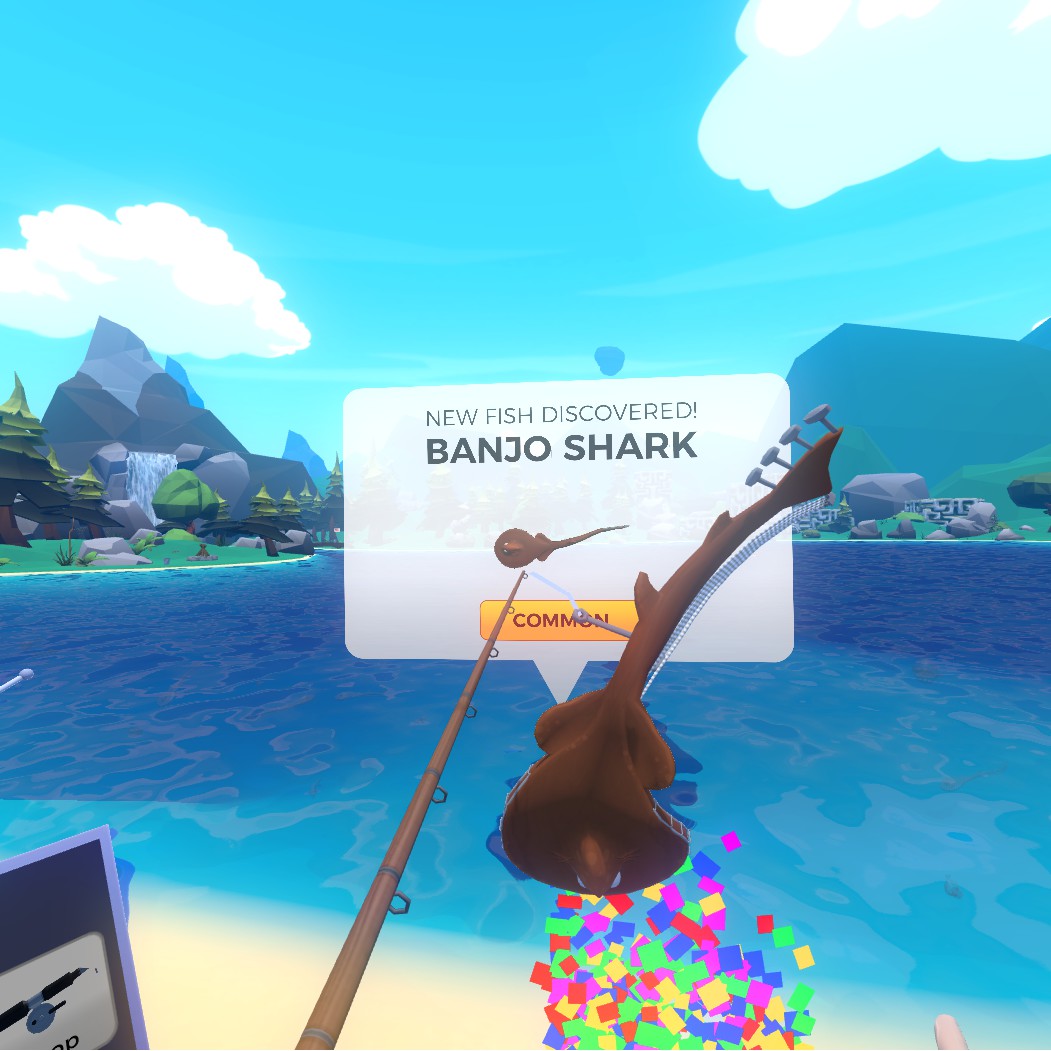 Crazy Fishing wouldn’t be called such if not for all the quirky, interactive fishes in the game. Most of them are like toys, such as the basketball fish which you can take to a hoop near one of the locations, or the binocular fish which actually works! There’s even a shooter fish and some cleverly placed targets throughout the map. Others are just plain entertaining like the boomerang fish who exclaims with an Aussie accent, and the wise fish who wears a conical straw hat and speaks with a calming voice. That’s not to say if you throw the boomerang fish, it won’t come back to you, because it will, but it could miss by quite a bit and end up back in the lake!

In-game exploration is something the devs have invested a lot of their time on, and it shows. There’s even a treasure-hunting element that could, in itself, occupy your time.

For an early access title, Crazy Fishing is surprisingly impressive. Mind you, I’ve never caught anything while fishing, or enjoy real-life fishing as much as I do in-game. Sure, there are still some kinks that need to be ironed out, but it’s a solid open-world VR game in its current state. Aside from polishing the game based on community feedback, the devs are working hard to introduce more exciting functionality and surprises, plus a new world, which we are very much looking forward to exploring.

Get hooked on Crazy Fishing now, available on Steam for $19.99.