This is the first review ViveReport has done on a title that was not built specifically for VR, yet rather an existing title that recently added VR support. That says a great deal about the quality of this title, as does the fact that this is the only game that I will play in VR while using an Xbox controller, which I will explain further in the review.

Thumper, is a dark, violent, yet remarkably beautiful and haunting rhythm game. It is built entirely around hitting specific buttons at a specific time, thus creating musical patterns that act as an accompaniment to the underlying score, which itself is a masterful piece of music.

You control a chrome beetle — hang in there with me on this — and the chrome beetle is on a track that spans across space to a seemingly infinite distance. Your perspective is placed directly above this chrome beetle which is speeding down said track. Aside from the track, there is nothing, a sea of black nothingness, only disrupted by the spectacle of lights and colors that surround the track as you go from level to level. 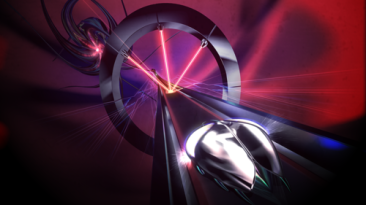 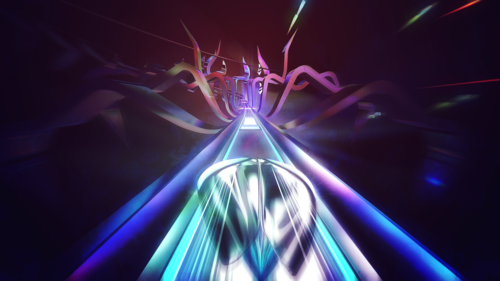 To keep the visuals fresh as you progress, beautiful geometric lines and spiraling strands of matter reach out from the track and create some of the most stunning, “trippy” visuals you’ll see in VR. The colors, shapes and art all mesh fantastically with the music of the game, working together to create a solid, clean and beautiful atmosphere, which is what helps Thumper stand out the most from other rhythm games.

While controlling the beetle, you must maneuver it to avoid any and all obstacles in your way. When you load up the first level, it teaches you how to do so. It will count the beat with you and indicate when to jump over an obstacle. Then, the second level will tell you when to turn left or right as obstacles are being generated by the music accompanying the gameplay. When you hear a louder thump, you can see a left turn appear in the distance, following the beat you will turn left at the exact moment the beat matches up with the left turn. You must move the beetle at the precise moment it lines up with the beat of the music, or you will crash or not get a point for that obstacle.

It’s important to note that your chrome space beetle can only sustain 2 crashes per level, so if you crash while turning a second time, you will have to restart that level. The game will also keep showing you new moves as you progress, and things really start to pick up in the later levels.

Actual point scoring comes into play here, as well. Based on how perfectly in time you dodge or jump an obstacle, you will get a score for each level. The combined scores of all your tracks in a level are then submitted to the leaderboards.

A Crescendo of Madness

The level progression and pacing is handled wonderfully. You are eased into this dark world and the controls slowly, each level addressing a new movement, and building your competence, allowing for greater enjoyment of the game as it progresses. The more skilled you become at controlling the beetle’s movements, and at improving your timing, the more obstacles and new mechanics are introduced, constantly pushing the player to step up to the challenge, inducing both rage as you fail, and cries of joy as you succeed.

As it was built as a flat game, there are plenty of levels to keep you occupied. When I first started playing, and beat the initial 20 tracks or so, I figured I had beaten the entire game. However, to my shock, I saw it just opened up the next level. What I had perceived to be the entire game, was literally just 1 level, with sections of course, but you get my point. Plenty of content, which amps up the difficulty along the way keeping you on your toes and super attentive to every. single. beat.

PS: I mention the use of an Xbox controller, or any gamepad in that case, because Thumper does have full VR support including support for the Vive wands. However, it’s the dreaded trackpad split into 4 zones for certain moves which really becomes incredibly frustrating when coupled with the somewhat iffy responsiveness from the Vive wands’ trackpad. For this, and this alone, it makes playing Thumper in VR with a gamepad excusable.

All in all, it’s literally an awesome experience, from the visuals, the score, to the tense, frenetic gameplay at times. Thumper is a work of art fit for any platform. With its recent port to the Nintendo Switch, we are seeing this being realized — all from an indie dev’s simple project first started in 2014, to a triumph of a rhythm game that’s getting more and more of the attention it deserves.